The Gulf Breeze Dream: Part One 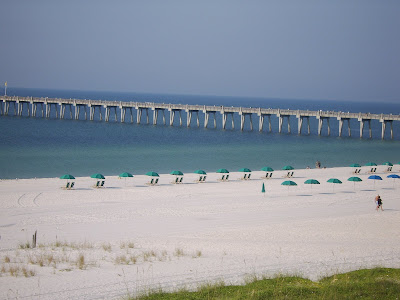 I’m sitting in Pensacola Beach, Florida overlooking the Santa Rosa sound and waiting for the sun to go down. Apparently you can walk out to the pier around sunset and see a cornucopia of sea critters. Being fond of critters of most kinds I’m looking forward to this. But as I type and watch the wind sway the palm trees, I cannot help but marvel at how I got here.

Today, January 15th, 2009 actually marks the second time I have been fortunate enough to be here on this beach with its sugar sand and turquoise water. I’ll write more on this trip later, but first I must share the synchronicity that lead me to one of my best life discoveries: If you put a genuine dream out there and speak it aloud, it becomes reality in a most marvelous way. Let me tell you the story of the Gulf Breeze dream.

I never imagined that Jimmy Buffett would be responsible for one of my most vivid dreams coming true. The Gulf Breeze dream started with him, a pirate, a man, a musician who I hadn’t paid much attention to before. Sure, I had heard Margaritaville playing on the radio in years past, and the song might have stirred a few Caribbean musings, but nothing like what was about to happen.

In the early part of the summer of 2008 I was browsing in a second-hand bookstore with my husband, looking to satisfy the thirst of a read-a-holic. The heat and humidity of the Georgia summer had set in, and when I saw Buffett’s book Tales of Margaritaville, my hand gravitated toward it. The theme of the book hummed in perfect synch with my overall mood those past weeks – summer, hot, laid back. All I needed was a blender and some salt.

Back at home I plunged into the book with fervor, and as soon as I finished it I went straight to the library and checked out A Salty Piece of Land, Jimmy’s perfect novel of a cowboy named Tully Mars and his coconut-scented adventures at sea. Every page created and weaved together the seeds of a dream within me. My mind drifted toward crawfish, salty air and the Gulf of Mexico. The Atlanta summer, the fireflies and a few days off work to hang out by the pool pushed me over the edge. I had been around the world but never to Gulf Shores. I had to go there. I had to live the Jimmy Buffett dream, and I spoke this aloud to my husband, Jay.

“I want to go to Gulf Shores,” I said, “maybe this summer, even if just for a few days.”

He nodded his head and said it sounded nice, but we couldn’t think of when and how. Things had gotten so busy. We were both tired and a little worn down from our schedules. Our spirits needing renewing but we weren’t sure how to make this happen. It’s amazing how life can get away from you.

The spark was lit, I believe, right then. Speaking my wish was the first step in manifesting my Caribbean-blue vision. What if I had never said it out loud? I am now surer than ever that all you have to do is ask. How many dreams are left to languish under a thick layer of dust, only because we never asked for them to blossom into reality? To make a long story short (for the full story e-mail me) I ended up with two training requests from two separate clients within two weeks of each other – and they both lived in Gulf Breeze, Florida, right on Gulf of Mexico. The best part was that I really felt that I could help both clients and have a significant impact on them. I think that’s the biggest part of the dream, helping others. 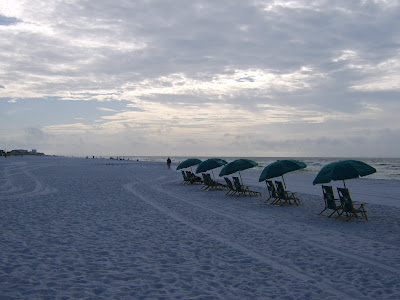 From the moment I got on the train to the airport, the trip to the Gulf was blessed and charmed. I had packed an entire factory of bricks in my suitcase due to all the class materials, so when I arrived at the check-in counter I feared extra baggage charges would top the national debt.

“Put your bag on the scale,” said the attendant.

“I’m afraid to,” I replied, but complied with the inevitable. The limit was fifty pounds. The bag weighed exactly fifty pounds.

The flight took off to reported winds and overcast skies in Pensacola, but by the time we began our descent, the clouds had parted and the blue sky had begun to fight its way into dominance. By the time we landed the sky had won over the clouds. I stepped out of the airport and smelled the salty air. Jimmy, we have arrived. I picked up my rental car and began the straight shot down 9th avenue to the three-mile Pensacola bridge, where I saw the water for the first time. Pelicans dived for food and the sun swept the Gulf with diamonds. When I crossed over the bridge, I saw the sign: Welcome to Gulf Breeze. The dream had come into reality and I grinned as wide as a Cheshire cat.

When I arrived at my hotel on Pensacola Beach, just across a small bridge from Gulf Breeze, hardly a cloud floated in the sky and I headed right for the water. That day felt like a year’s worth of vacation as I walked the white sand, collected shells, waded in the Gulf and breathed more deeply than I had in a long time. 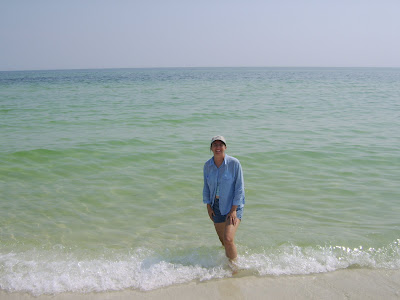 I dozed on the beach and dreamed, but nothing was better than waking up and realizing where I was. In the evening I ate fresh Gulf shrimp at Peg Leg Pete’s restaurant and listened to a live band play Jimmy Buffett, paying tribute to the man who started it all. After dinner I took a walk on the marina where Peg Leg Pete’s and many other local restaurants kept their own shrimp boats. Orange clouds coated the skies and I looked out over the water, taking mental pictures until the sky turned to night.

The next days were filled with bliss. The Gulf Breeze clients were two of the most interesting I’ve ever had. For the first two days I worked with a family from Spain, helping them through their struggles in a new culture. We navigated through the differences between Seville, Spain and the quiet beach community in which they now lived and became friends along the way, what they needed most, I think. The next day I worked with a technology company called AppRiver (www.appriver.com), a rare gem in the business world. The leaders of this company have genuinely created a positive corporate culture where people feel they are a part of something. They have a sabbatical program , a free exchange of ideas and the inspiration around there is infectious. I formed a bond with both of these clients above and beyond the norm. Both of them were a joy to work with, each of us renewing the spirit of the other.

Then my vacation started, eating coconut shrimp at Flounder’s restaurant, listening to UB40 and watching people play beach volleyball. The skies stayed blue every day and I walked the piers, watched the sun dust the palm trees with pink light every evening, fed the fish behind the restaurants and stayed present for every moment.

Each morning I ate breakfast in a local café, and then headed down to Fort Pickens beach where there were no houses, but an abundance of white sand, clear water, sea birds and jellyfish. I swam for hours in the Gulf while fish nibbled at my ankles and I got sunburned in spite of my best efforts. I read books under a beach umbrella and ended my days with mouthwatering meals like blackened tuna, coleslaw, corn on the cob, watermelon, crab cakes, honey muffins and pina coladas. At long last, Jay flew in on Friday night, and we continued the dream together, eating enough shrimp to clear out the Gulf, swimming, visiting the Museum of Naval Aviation and taking in views of the bay. 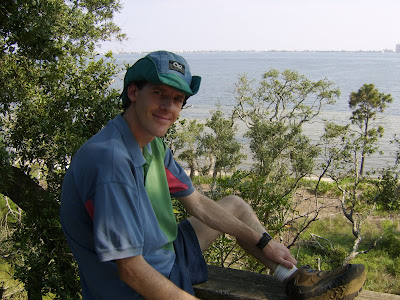 On our last morning in Pensacola, the outer bands of Hurricane Gustav brought gusty winds, but people still walked on the beach and took in the exciting sight. Jay and I leaned into the wind and felt like we could fly, but in fact we couldn’t. Our flight had been canceled, so we packed up the rental car and headed off with the wind at our backs. The trip home could not have been easier. 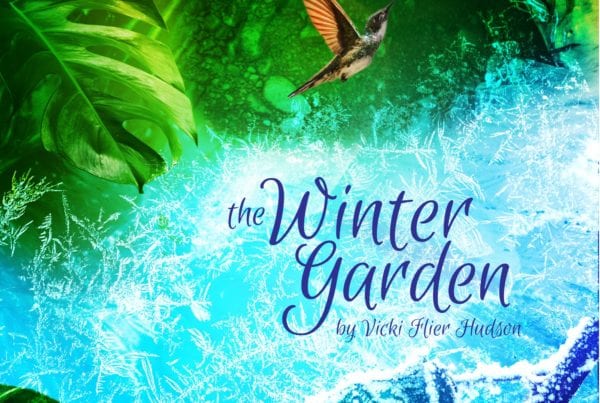 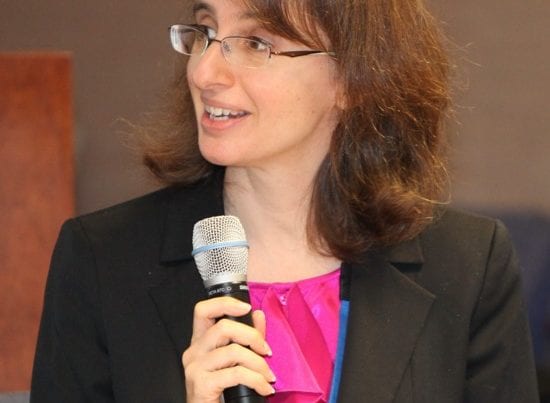