Playing to Strengths: Lessons Learned from My Journey to NASA

By Vicki Flier HudsonMay 30, 2018No Comments 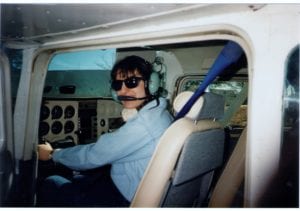 This month’s blog is a personal journey, the story of a dream that I thought I had to let go of forever. Turns out it was waiting for me 40 years later, in a form I hardly recognized but that was more meaningful than I could have imagined.

A lot of young children dream of being astronauts, and I was no exception. My favorite toy as a three-year-old was a Fisher Price airplane with the little people inside. I would fly the plane around to different countries, some of which I made up!

As I got a little older my mother gave me a plastic space shuttle to play with. Anywhere I went in the house, that shuttle went with me. I was already sure that I wanted to work for NASA, even though I was still learning to read and write. Typical little kid, right?

Only I didn’t grow out of the obsession. I had posters of astronauts in my room, built model airplanes, and read biographies of space farers. Then it got real. One sunny day when I was 12 my dad and I drove through the Santa Monica airport as we often did. I saw a sign, literally and metaphorically. The literal sign said, “Introductory Flying Lesson $29.99!” This was my destiny.

I begged my father to stop the car. We went inside of a little building called Gunnell Aviation, and before I knew what was happening I was in a Cessna 152 with a grizzled war veteran named Roy. He had gray hair and bright blue eyes, and his calm demeanor helped me keep it together as we started up the engine. Was this really happening?

We took off into the brilliant blue sky, climbing toward the ocean. The sun cast a sheet of diamonds on the water as I looked out over the endless expanse of city and atmosphere. Then Roy turned to me and said “Your airplane.” Who, me?

With eyes as wide as saucers I took the wheel. Roy showed me how to check the instruments, keep the plane level, and do shallow turns. That was it for me. I had found my calling.

As the years passed I stayed committed to my dream. My parents allowed me to continue the flying lessons as long as I worked to pay for part of the tuition. I soloed at age 16 and planned to join the Air Force, but my bad vision took that option off the table. Undaunted I decided to approach NASA from the academic route. I would get a degree in one of the sciences. Only one problem remained: While I was decent in science at school, I struggled with math. Beyond that, I seemed to be ignoring all of my natural strengths. Public speaking, writing, and communicating with people from different cultures came so easily to me that I assumed they did for everyone.

I entered university as an ocean biology major and my next two years were a constant struggle. I enjoyed some of my science classes but something did not feel right. It felt like slogging up a hill. All the time. I would eventually get to the top, but I didn’t feel rewarded; I felt drained. Meanwhile I was putting the same amount of work into my English, history, and writing classes but feeling energized by them. I saw this pattern, but I couldn’t give up on NASA! I would stick it out. It would be worth it when I was working for them, right?

I stayed in denial for two years as things worsened, and then I became ill. I had severe abdominal pain for months and ended up in the emergency room. I didn’t know what was wrong with me, but I knew one thing: I had to let go of the tyranny of the NASA dream. I had to start giving my strengths a chance, even if I had no idea what I would do with them.

With my last two years of college I took the writing classes I loved and thrived in them. My health improved; I worked just as hard but I was happy.

So how did I finally end up at NASA? Simple! I graduated college, got a job in corporate training and technical writing, quit that job five times to live around the world, got rehired each time I came home, got promoted to the IT department, worked in Germany, quit my corporate job after eight years to start my own company, got more certifications, studied for years, and worked with countless organizations doing cross-cultural consulting and training. I secretly never gave up hope that I could work for NASA in this new way. A couple of weeks ago, after waiting 40 years, I went to Kennedy Space Center to do training and consulting! The details are confidential, but I can tell you it was one of the best experiences of my life.

The lesson learned for me is that dreams that are meant to be don’t die. They might rest, go underground, and hibernate for a while. But if you trust yourself and play to your strengths, they will reemerge ready for liftoff!

Where the Highroad Meets the Stars in Wapakoneta, Ohio