By Vicki Flier HudsonSeptember 7, 2009No Comments 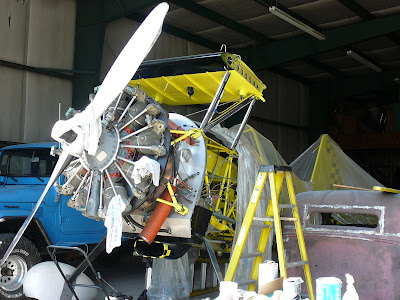 When I am paying enough attention I tune into signals that urge me to seize the moment and have a glorious adventure. These moments happen both abroad and right around the corner, and today I had one of the most exciting adventures of my life. I’ve had a cold for the last few days and spent most of my time this weekend getting to know my couch on a deeper level. I sat surrounded by piles of Kleenex unable to decide whether I was too hot or too cold. At long last this afternoon, as I recuperated at my friend Bobbie’s house, the fog in my head began to clear and I had a little energy back. Bobbie and I walked outside and took in the blue sky and birdsong. As we were soaking up vitamin D a plane flew overhead, but this was no ordinary jet plane. Bobbie said it sounded “old-timey” and we strained to see it passing over but in vain.

Having been a pilot in my teens I still look to the skies and remember soaring over the Pacific Ocean in my Cessna 152. When I hear a unique-sounding engine my eyes are drawn upward and and memories take me back to my time in flight school. Anyone who has spent time hanging around municipal airports can tell you that each one has its own culture. Pilots and instructors speak a cryptic language, a code of numbers, symbols, and cloud types. Not only that, but people 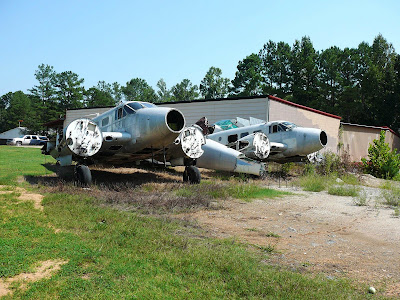 who fly share a common dream in the grander picture, the desire to defy gravity and fly not just to get to point B but for the sheer joy of leaving the ground. These shared threads that tie pilots together create a culture that becomes visible if you spend enough time there.

As Bobbie and I listened to the plane passing over us she said,

“I wonder if its coming from the little airport right around the corner from here.”

What? I had visited Bobbie a hundred times at her Woodstock home and never knew there was an airport! I couldn’t believe my ears.

“I’ve got to go there!” I exclaimed, then she looked at me and I looked at her. Did I want to go now in spite of my cold? I did, indeed. 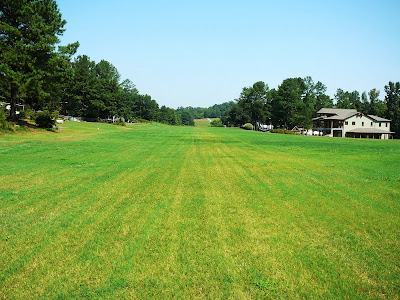 With much excitement we hopped in the car and made our way out of her subdivision. Soon the neighborhood gave way to land not subdivided but rich with lush trees and older homes. We passed a sign with a plane on it and pressed on, growing more jittery with energy. Before we knew it we turned onto a small lane with a gravel road. The magic ignited as we passed an abandoned plane in the woods and ramshackle houses with homemade decorations. At a fork in the road we turned left, cruised down a small hill and there it was – a private airstrip of grass glowing in the sun, surrounded by acres of land and homes to the left and right.

We parked the car and the magic continued, this time at a faster pace. Everywhere we turned were iconic symbols of small airport culture. The first thing I saw was a couple of scrap planes across the field and I went back in time instantly to my flying days. When I was young I loved walking around abandoned planes and peering in. I always imagined a ghost pilot waiting inside and if I got too close he would fire up the engine and take off with me hanging off the wing. When I saw those silver fuselages I wondered if that ghost was still there. I was almost giddy with the thrill of finding this place and the best was yet to come. 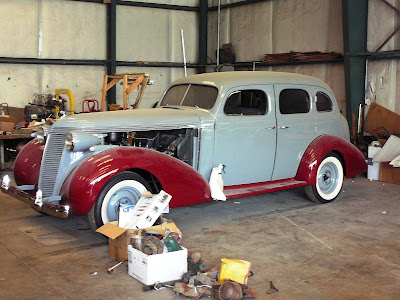 Behind our car was a large hangar with a custom-built acrobatics plane, painted bright yellow with a silver prop and equipped with an engine that weighed more than the plane. Bobbie and I looked at each and could not stop exclaiming our surprise – then we noticed the cars, at least fifteen of them including a beautifully restored Studebaker, a Thunderbird, and other classics. A friendly dog came to greet us and a man waved to us from the back of the shop in this movie-like scene. His name was Kirk, and he reminded me a of salty sea dog but with planes instead of boats. He had been in three crashes but never stopped flying acrobatics or living his own life intentionally. We asked permission to walk around and he gave it gladly. We felt like Christmas had come early (or Hanukkah in our Jewish case) as we looked at the classic cars, rusted old pick up trucks, and antique equipment.

Soon the owner of the property, a kind man named Steve came and welcomed us, encouraging us to explore. His dog Ivan, also large but sweet like the other one, licked our hands. I wandered onto the runway and across to the abandoned planes. Looking inside at the broken instrument 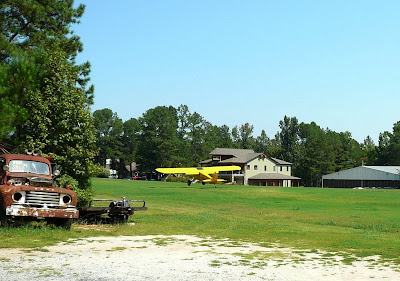 panels and shattered glass I felt no sadness, only curiosity about where the plane had been, what stories its pilots would tell. Just as we were chatting with Steve we heard a plane coming overhead. Someone was coming in!

I said to Bobbie, “If I’m reading this right, he’ll make a turn to the left, then follow a standard traffic pattern in to make a landing. I can’t believe our luck!”

We waited, holding our breath, while the plane went out of sight momentarily then came back around for final approach. The plane was bright yellow, as if it wanted to be seen by we two adventurers, and it zoomed right by us as I snapped photos, then the pilot gently touched down on the apple green grass. He then taxied to his hangar, parked the plane, and went inside his house to relax. No other planes came before or after while we were there and we realized that’s just how things worked in a magical place of flying machines. Everything contributed to creating a spectacular memory and a surreal joy. That dream can’t linger forever and soon it was time to get out of the sun and back to the couch for me. But I vowed to return with my husband and Steve said there were plenty of broken old cars for him to work on! 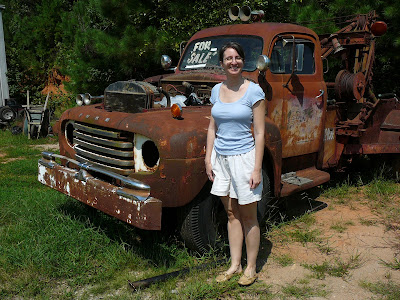 Had we stepped back in time? Had we been transported to the movie Radio Flyer? We had no idea this enchanted airstrip was right in our backyard and dreams of flying permeated me as they had so many years ago. Within minutes I was back in that world of instruments and steel, color and oil. So strong is small airport culture that it created magic instantaneously for both Bobbie and I, perhaps because it reminded us of a simpler time in our nation’s culture, if such a thing ever existed.

Whatever the reason I will always be glad that I listened to the signals, seized the moment with my friend, and had one of the best experiences of my life.

It Pays to Remember: Culture is Fun!